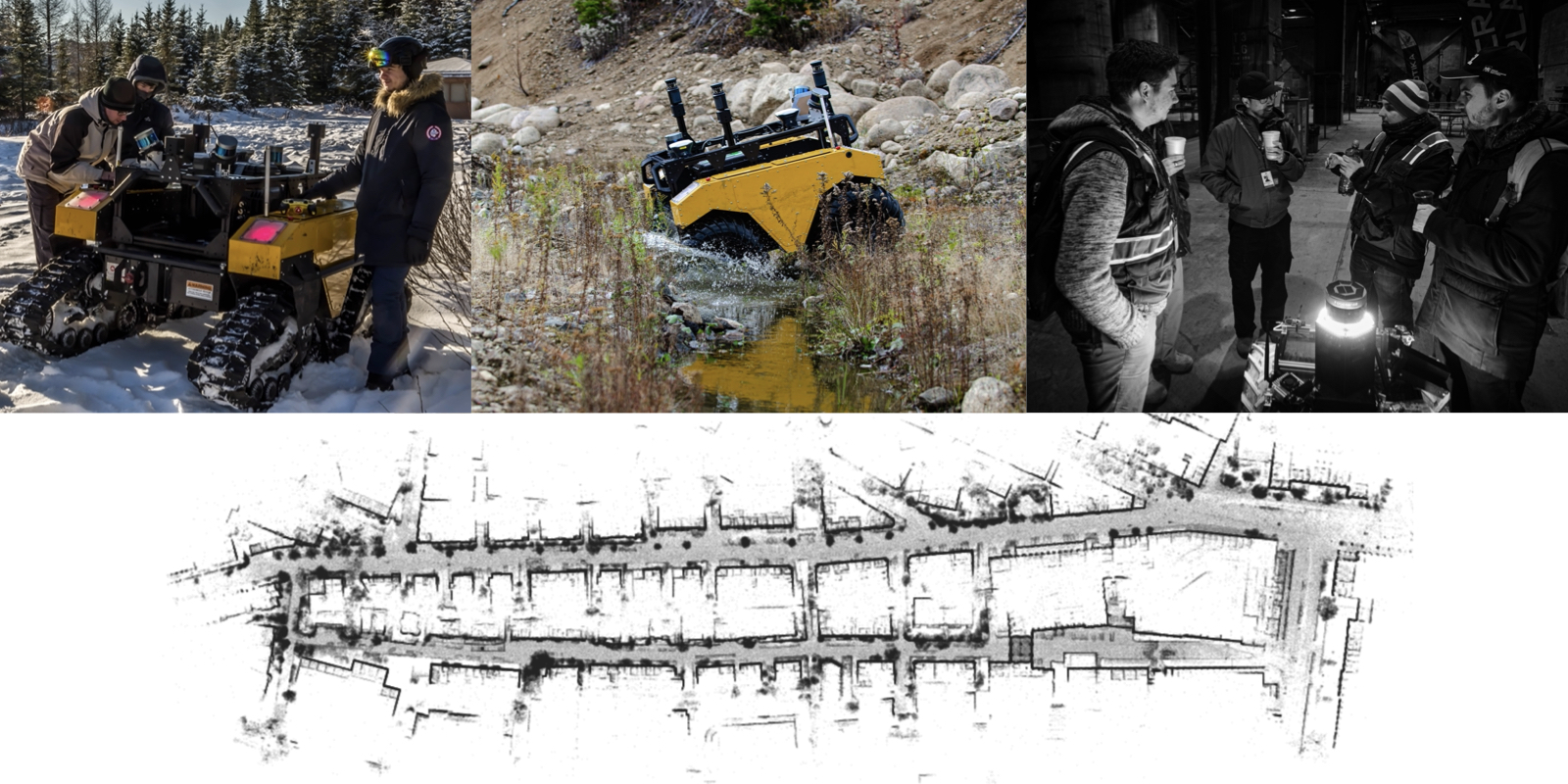 Four internships in robotics for the summer 2021 all taken!

Norlab is opening four internships covering multiple fields of study for this summer. Here is the list of opportunities:

All the positions have been filled, but keep an eye on the Norlab website, there will be more in future!

This internship is part of the SNOW (Self-driving Navigation Optimized for Winter) project, which aims at adapting autonomous navigation technologies to environments affected by winter. As part of his mandate, the student will develop an open library to predict the movements of a mobile robot. Several prototype algorithms have been analyzed in a Python Notebook, and must now be coded cleanly to allow real-time computation on a moving robot. The goal of the library is to allow researchers in the laboratory to do experiments faster. Ultimately, these experiments will allow mobile robots to adapt to changes in traction caused by snow cover during autonomous navigation.

The trainee will be supervised by a PhD student specializing in control, allowing the student to focus on software development while acquiring practical robotics skills. The student will also be expected to support the team’s efforts in robot integration and field deployments. The intern will have access to state-of-the-art equipment and a 500 kg robot. The library will be publicly hosted on the lab’s GitHub and will be integrated with ROS (Robot Operating System).

For contextual information, see the project page on SNOW.

The laboratory is continuously developing several 3D mapping solutions for autonomous vehicles. Once the robot is on the move, it is relatively easy to locate it on a map. However, the laboratory has no software tools to relocate a robot if a map is reused.

The objective of the internship is to develop a software to relocate a robot in a given 3D map. The first step will be to relocalize the robot manually in a 3D graphical user interface (rviz). In a second step, the placement of the robot will have to be refined automatically using a recalibration tool used in the laboratory. Finally, an algorithm to find the optimal placement of the robot in the map automatically (Go-ICP) can be implemented. The student will be supervised by experts in 3D cartography and the registration algorithm. The code will be publicly hosted on the GitHub of the laboratory and will be integrated to ROS (Robot Operating System).

For contextual information, see the project page on libpointmatcher.

The laboratory is preparing for a major U.S. deployment in September 2021. The goal of this deployment is to explore underground environments using a fleet of autonomous robots. To do so, the laboratory recently acquired new robots and commissioned the design of a custom power supply board for the sensors.

The objective of the internship is to complete the electronic integration of the robots and to participate in the robustness tests of the systems. The tracked robots should be able to climb stairs and withstand a certain level of shock. The student will be supervised by robotics experts with backgrounds in computer science, electricity and mechanics.

For contextual information, see the project page on SUBT.

The laboratory is preparing for a major U.S. deployment in September 2021. The goal of this deployment is to explore underground environments using a fleet of autonomous robots. The laboratory is developing 3D mapping and localization solutions based on lidars, but the maps used are often too sparse to allow obstacle avoidance.

The objective of this internship is to combine the data from a lidar with the robot’s localization algorithms to produce a dense map within a close radius of the robot. In a first step, a dense map will be produced and displayed in a graphical user interface (rviz). Then, compression solutions will be tested to reduce the bandwidth of these maps during wireless transmission. Finally, obstacle avoidance algorithms will be studied. The student will be supervised by experts in 3D mapping and resetting algorithms. The code will be publicly hosted on the laboratory’s GitHub and will be integrated to ROS (Robot Operating System).

For contextual information, see the project page on SUBT.

All internships will be held in the Norlab (Northern Robotics Laboratory). This research laboratory specializes in mobile and autonomous systems operating in northern or difficult conditions in general. We aim to study problems related to navigation algorithms in order to push the limits of what is currently possible to do with a mobile robot in real-life conditions. Currently, our efforts are directed towards localization algorithms based on laser sensors (lidar) and 3D reconstruction of environments.

The laboratory has two workshops in the Adrien-Pouliot building allowing interaction with research equipment according to current health standards. Unless otherwise specified, software development can be done remotely using existing data sets. Once the basis has been demonstrated, tests can be done on site with real research robots.

There are two possible compensation options. The first option is for students aiming to continue at the Master’s level. If you have a rating greater than 3.8/4.3, we suggest that you apply for the NSERC Fellowship (https://www.nserc-crsng.gc.ca/students-etudiants/ug-pc/usra-brpc_fra.asp). Obtaining this scholarship will allow you to improve your record as a young researcher and normally comes with supplements from FRQNT. The laboratory also gives a $3,000 scholarship supplement for the internship. The application deadline is February 18, 2021.

If you are not selected for the award, salaries are set according to the collective agreement for research assistants and are approximately $15/hour. The work week is 35 hours/week. The duration of the internship may vary from 12 to 15 weeks.

Send your choice of internship, your CV and your transcript to the laboratory director, François Pomerleau francois.pomerleau@ift.ulaval.ca .

Positions will be allocated at the beginning of March 2021.