In the context of 3D mapping, larger and larger point clouds are acquired with lidar sensors. Although pleasing to the eye, dense maps are not necessarily tailored for practical applications. For instance, in a surface inspection scenario, keeping geometric information such as the edges of objects is essential to detect cracks, whereas very dense areas of very little information such as the ground could hinder the main goal of the application. Several strategies exist to address this problem by reducing the number of points. However, they tend to underperform with non-uniform density, large sensor noise, spurious measurements, and large-scale point clouds, which is the case in mobile robotics. This paper presents a novel sampling algorithm based on spectral decomposition analysis to derive local density measures for each geometric primitive. The proposed method, called Spectral Decomposition Filter (SpDF), identifies and preserves geometric information along the topology of point clouds and is able to scale to large environments with a non-uniform density. Finally, qualitative and quantitative experiments verify the feasibility of our method and present a large-scale evaluation of SpDF with other seven point cloud sampling algorithms, in the context of the 3D registration problem using the Iterative Closest Point (ICP) algorithm on real-world datasets. Results show that a compression ratio up to 97% can be achieved when accepting a registration error within the range accuracy of the sensor, here for large scale environments of less than 2cm.

As an example, we created the map of the Grand Axe of Laval University campus, where only a few minutes of data collection lead to a number of points at the limit of the real-time computation capability. The sensor used for this map, the Velodyne HDL-32E, yields up to 1.39 million points per second. Using our sampling algorithm, the map is compressed at 98%, while preserving geometrical information.

In contrast, the voxel method suffers from the discrepancy between the x, y and z scales, as it creates the bounding box with a radius of the size of the bigger dimension. Furthermore, as the ground is not aligned with the xy-plane, it keeps points which are at different altitudes within the dense path. Finally, when geometric details are not dense enough such as the pillars of the top-left of the map, the voxel method does not keep them. 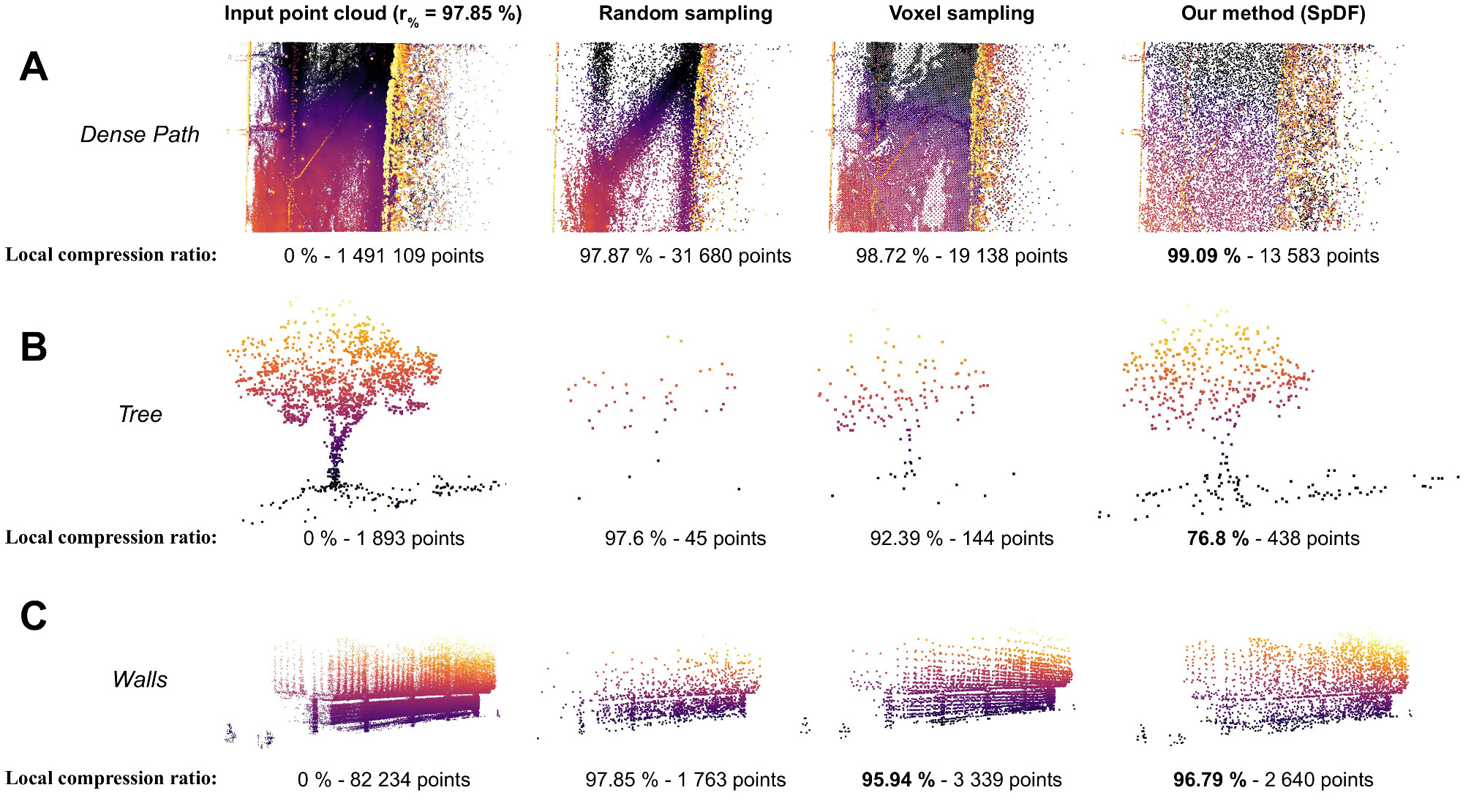